How To Add a Suppressor to Your Beretta Pistol 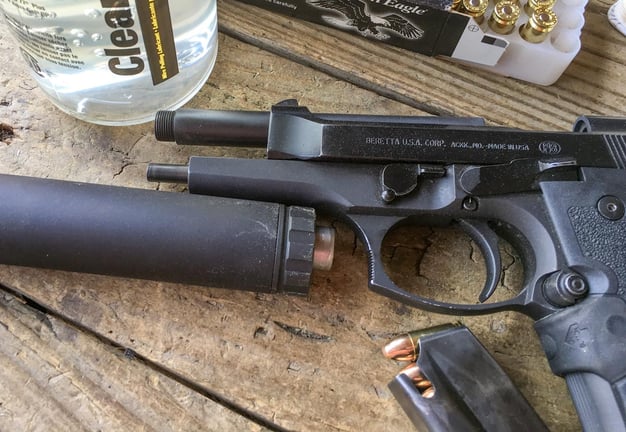 I think those Simon and Garfunkel guys were onto something with The Sound of Silence. Even though shooting suppressed handguns isn’t anything like it’s portrayed in the movies, it’s a whole new experience that offers not only a whole lot less noise but more enjoyable shooting characteristics.

Also see: How to Buy a Suppressor

Adding a suppressor to your pistol can reduce that dangerous report to a level that’s hearing-safe, provided you’re shooting in moderation. A single exposure to a noise of 140 decibels or higher will cause permanent hearing loss and repetition makes the damage cumulative. To put that in perspective, a 9mm pistol shot generates 155 to 160 decibels of noise. Suppressing that same pistol reduces the bang to the 125 to 130-decibel neighborhood. In addition to lowering noise for the shooter, people in the immediate area appreciate the relative quiet too. Just be aware that noise levels below 140 decibels are dangerous too, with repeated exposure, so it's still a good idea to use hearing protection if you're going to fire more than a couple of shots.

Suppressors also tend to make felt recoil smoother and mushier. Instead of a sharp kick, suppressed pistols feel like more of a leisurely push. As such, suppressed handguns are a great way to expose new shooters to pistol shooting. Without all the noise and concussion, it’s much easier for them to focus on techniques like sight picture and trigger control.

The good news is that suppressors are legal in most of the country. The process of getting your own isn’t even all that difficult - you can read more about exactly how to get one here. And, with a little bit of luck, the Hearing Protection Act will be passed before we all grow old. That would remove suppressors from all of the onerous restrictions of the National Firearms Act, making the process of purchasing one about the same as that of buying a firearm.

Once you’ve sorted out the legal aspect, it’s time to think about how to suppress your Beretta pistol. Let’s take a look at a few different scenarios for different pistol models.

The newest pistol from Beretta, the APX, is easy to make suppressor ready. You can purchase a ready-to-go threaded barrel from the Beretta store. Just field strip your APX and insert the threaded model in place of the one that came installed with your pistol. When you want to shoot without the silencer, either make sure the thread protector cap is screwed on or, if you want a slightly smaller footprint, put the original barrel back in place. Switching configurations couldn’t be easier.

Guess what? If you own this model, you don’t have to do anything at all, the M9A3 is ready to go out of the box with a threaded barrel. The other big difference is that both front and rear sights are easily replaceable, so if you want to add extra tall ones to clear the suppressors, that’s not a big deal.

The 92/96/M9 pistols all have a useful trait - the barrel extends past the slide just enough for a gunsmith to cut threading into the end of the muzzle. Having a suppressor-knowledgeable gunsmith add threading is the first option. Since the barrel is a non-regulated part, you can send it off in the mail to a specialist like Tornado Technologies or Gemtech to make sure it’s done right.

The other alternative is to purchase a second pre-threaded barrel. Companies like Gemtech, SilencerCo, and Tornado Technologies all sell Beretta factory barrels that are threaded and ready to go.

Just so you’re not surprised, know that the 92/96/M9 pistol sights will most likely be shielded by the suppressor body, so you’ll be viewing your sights “through” the suppressor instead of over the top of it. It's not a big deal, we just don't want you to be surprised.

There’s not much more fun than a suppressed .22 pistol. The lack of recoil and relatively low unsuppressed noise level means these are super quiet when you add a rimfire suppressor.

The M9 and M9 A1 .22LR pistols are compatible with drop-in threaded barrel upgrades that you can order direct from the Beretta store. If you haven’t yet bought a Beretta rimfire pistol, consider the 92 FSR model. It comes with a threaded barrel and a mock suppressor you can use while waiting for your real one.

Most PX4 models have barrels that are flush with the muzzle opening in the slide, so threading would be tricky and require an extension adapter. However, the PX4 Storm SD .45 ACP model has an extended barrel, and that provides room to thread that extended area. One thing to consider is the type of threading you want to add. The barrel rotates on recoil, so depending on whether you use right or left-hand threading, the barrel will want to tighten or loosen against the suppressor mount with each shot. There are pros and cons to each approach depending on your anticipated shooting volume. With an ever-tightening suppressor, it can become harder to remove while the opposite direction will require you to check to make sure the mount is good once in a while. No biggie either way, it's just something to consider.

Let’s close with a bit of trivia. You might have noticed that in this article we used the terms “suppressor” and “silencer” interchangeably. Technically, either word is correct. The device patented by Hiram Percy Maxim in 1909 was called the “Maxim Silencer.” In more modern times, companies started to use the more descriptive term of “suppressor.”