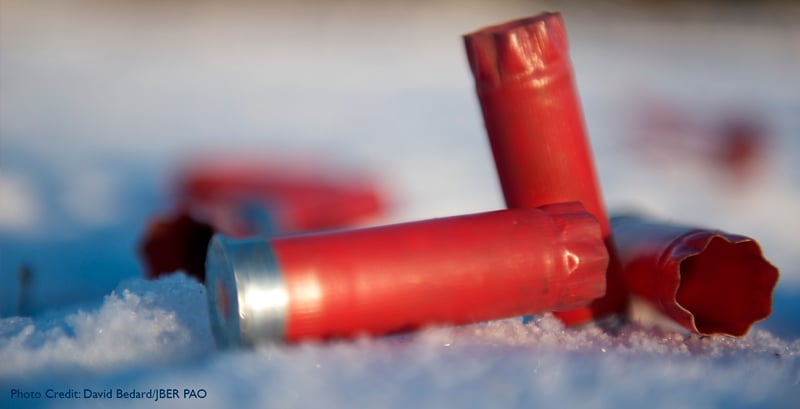 When my husband and I were at SHOT Show last winter, we were lucky enough to visit with Kim Rhode to get some shotgun tips from one of the most successful clay shooting athlete in history. Among the many questions we asked was how often she practices. She told us she shot a minimum of 500 rounds a day.

Not long ago I mentioned to a friend how often my daughter is practicing for competitions. It is not nearly as much as Ms. Rhode, but my friend about died. She said: “My goodness. I bet that little girl’s sore.”

What my friend doesn’t understand, and many unexperienced don’t, is the difference in shotgun loads. I obviously wouldn’t want to go to the range and shoot  3-1/2” turkey loads 500 times. My shoulder would probably fall off before I made it half way through. The different shells produce different power. Therefore, we use some for blasting clays and others for knocking down bit tom turkeys.

If a first-timer heads to the local gun store and look for shells, it can be a bit overwhelming. There are boxes lined up with numbers all over them. Not to despair. The numbers are there to help.

The box gives  important information you need to know in order to choose the proper shell for your proposed activity. From left to right, the box lists the gauge, shell length, velocity, amount of shot and number of projectiles.

The numbers on the box help you find the proper shell size for your shotgun. They also provide information so you can find the appropriate shell for the intended use. If you take a large, 3-1/2” turkey load to the skeet field, you will most likely not be allowed to shoot because it is too powerful a load. If you did shoot it, your shoulder would become sore quite rapidly.

When you look at various shotgun shells side-by-side, you notice some differences. One you may note right off is that some shells have a lot of brass at the bottom. The metal at the bottom of the shell is called brass because years ago, brass is what was used. Over time brass became very expensive. Since then manufacturers have switched to less expensive metals such as aluminum and tin.

You will hear the terms “high brass” and “low brass” when discussing shotgun shells. Its height needs to be large enough to contain the amount of charge in the shotgun shell. The charge (gun powder) used varies depending on the shot being used. Smaller shot needs less charge than larger/heavy shot so it would have low brass. To put it simply, the higher the brass, the stronger the recoil.

In the picture below you will see cutaways of shotgun shells. Note the various size of projectiles. The size is important and needs to be matched up with your intended use.

Target loads are what we shoot in practice each day. They have low brass because there is no need for a lot of charge. They hold smaller shot and are used for shooting clays and small birds.

A turkey load would not be ideal at the range because it has high brass. High brass indicates a high amount of charge and heavy shot. You need a higher charge to launch that heavy shot from the barrel. In turn, you need heavy shot to take down a large bird.

For waterfowl, you want a high brass shell, however, not as high as that of a turkey load. The shot size for a duck doesn’t need to be quite as large, so a smaller charge is used. The size also varies between larger mallards and smaller teal. If you use too large of shot, you will damage the meat upon shooting the bird.

The variety of shot selection is huge. Steel shot, tungsten, buck-shot, lead-shot and various others are available and in each there are a number of sizes. With the variety of materials used for shot pellets, different velocities are attained. A tungsten shot will fly faster than steel shot, and many duck hunters will argue with you as to which is best.

In some areas shotguns and a lead rifle slug can be used to hunt big-game. These shells are high brass. They have a high amount of charge in them in order to push the single large projectile out of the shotgun barrel with a velocity high enough to penetrate a large animal. The slug is rifled because the majority of shotgun barrels are smooth bore. The slug creates its own spin when it is discharged from the shotgun.

Now, you know how these tough women are able to shoot so many rounds in a practice session without wounding their shoulders. Get some target loads and have fun practicing at the range.