How to Deal with Pistol Malfunctions 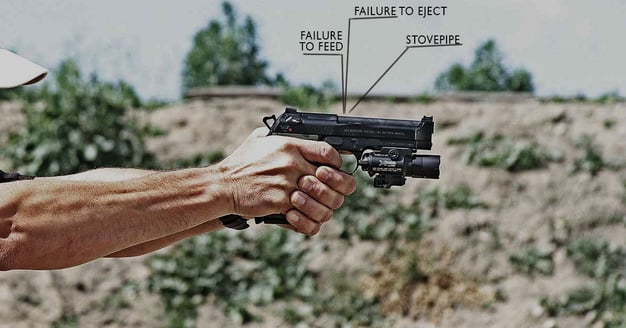 The loudest sound in the known universe is that of a “click” when your gun is supposed to fire. We’ll refer to that sound as a malfunction. Sometimes there’s not even a click and the gun still won’t fire. We’ll call that a malfunction too.

Fortunately, unless something physically broke on your gun between shots, malfunctions fall into a couple of common categories. Let’s take a look at how to deal with them.

If you’re at a retail or club shooting range, odds are pretty good that a Range Safety Officer is nearby. In that case, never hesitate to ask for help if you are not confident in what you’re doing. Range Safety Officers deal with questions and malfunctions about a thousand times a day and will be able to help you out. Just put your gun down on the counter, muzzle facing down range, and seek assistance. Whatever you do, don’t turn around with the gun in your hand and yell “Hey!” That will cause a ruckus for sure.

A semi-automatic pistol is a nifty invention. The “auto” part of semi-automatic refers to the fact that the gun is designed to automatically eject a spent cartridge casing and load a new one after each shot. Sometimes, things go wrong and the cartridge scheduled for forcible ejection doesn’t want to leave. It’s the same principle as those relatives from Ohahumpa, Florida who visit at Thanksgiving.

More often than not, a failure to eject is caused by the shooter. Semi-automatic pistols rely on the shooter holding the frame of the gun still during ejection so that the slide and springs have something to work against. If you use a weak grip, the gun moves backward with the slide and that whole bit of fancy recoil mechanism engineering fails. This may cause an empty cartridge case to get stuck in the ejection port. This blocks a new cartridge from being loaded and prevents the slide from closing fully. All this is a long way of saying the gun don’t shoot no more.

Sometimes, the failure to eject or feed malfunction is caused by a magazine not being fully inserted into the gun. It may stay in place, but not be fully engaged. As a result, the cartridges in the magazine aren’t lined up with the chamber properly and won’t feed reliably. Guns aren’t pansy toys, they’re meant to be operated with vigor. So whenever you insert a new magazine into a semi-automatic pistol, smack it in there like you mean it.

Whatever the cause, to make the gun work again, you have to get rid of the spent cartridge casing and allow the slide to grab a fresh cartridge from the magazine and load it in the chamber.

Here’s the solution: It’s commonly called the Tap, Rack, Bang drill, but I prefer to call it Tap, Rack, and Reassess. After you “tap” and “rack” it may be appropriate to reassess whether you still want or need to fire before pressing the trigger again. It works like this:

If this drill does not solve the problem, it’s time to move to the next method of clearing, as you might very well have a double-feed malfunction

The next most likely malfunction scenario is a beasty one. It’s called a double-feed.  And it’s double trouble because you have to do some rhythmic gymnastics to clear it. 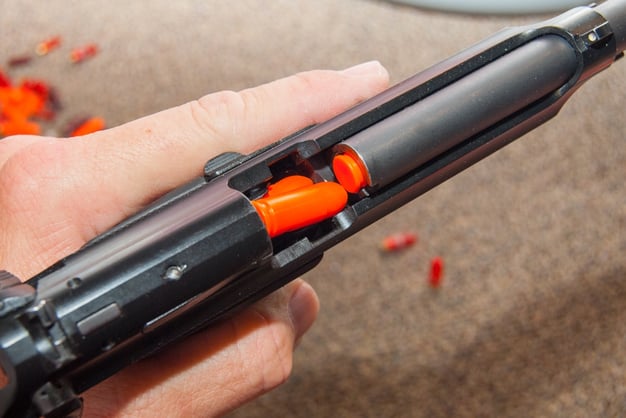 If these methods don’t clear the problem, then there is more going on that we can’t address in the scope of the book. Try getting help from the Range Officer!

Remember, if ever in doubt, ask for help!