How To Take A First-Time Shooter To The Range 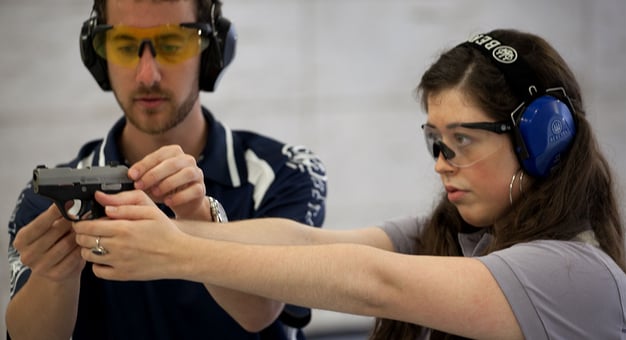 As a member of the shooting community, one of the most important things you can do is take new shooters to the range. If we all brought along just one guest per month and gave them a fun and safe experience, we’d never have another worry about protecting our heritage and rights.

So, how do you share a lifetime of your experience and knowledge in a single visit? Consider our new shooter checklist to help organize your thoughts and activities to ensure that your guest will not only have a great and safe experience but will want to go again.

Also see: How to Rack Your Handgun Slide Like a Boss

The very first thing I teach new shooters are the four rules of gun safety.

It’s OK to have a little fun with this as long as it reinforces the importance of the safety rules. For example, I like to show an “empty” gun as we’re packing up for the range and ask if it’s loaded. When they invariably say “no,” I laugh and remind them that a gun is ALWAYS loaded. That tends to help reinforce the point. It’s also a good idea to tell your new shooter that you’ll be reminding them of things like “finger off the trigger” once you’re at the range. If you keep it light, and let them know that everyone has to learn trigger safety this way, they won’t get offended.

Even outdoor ranges can be noisy and distracting, so I like to have a quick “how this works” class before we leave. While demonstrating the safe operation of the guns you’ll be shooting, take the opportunity to show, and remind your guest about the four rules of gun safety. Doing a quick lesson in the comfort of your home allows them to learn and ask questions away from the intimidating environment of the shooting range.

3. What to Expect At the Range

Most new shooters have some anxiety about going to the range for the first time. We always tend to be nervous about trying new things, but this activity comes with lots of noise and a large dose of preconceived fears. Telling new shooters what to expect and how your range operates will help remove some of the unknown and reduce overall anxiety. Let them know in advance that it will be loud - that’s why you’re packing hearing protection. Also, let them know that it’s not unusual for range staff to be walking around with holstered guns. You might even walk them through the “how it operates” procedure including check-in, changing targets, cold and hot range rules and whatever else applies at your facility. The more you can tell them about what to expect, the more confident they’ll be. It’s hard to have fun when you’re anxious, right?

If you want to be a shooting sports ambassador, you'll want an extra supply of shooting glasses and hearing protection. You might consider buying a couple of sets of electronic ear muffs for yourself and your future guests. Using electronic hearing protection will allow you to talk easily with your guest for instructional and safety purposes. It’ll also facilitate the fun factor as you can offer encouragement while they’re shooting.

Everybody loves a rimfire. Low noise and recoil not only reduce the anxiety but make it easier to a first-time shooter to hit the target. Since you’re bringing a new shooter, you want them to leave thrilled about the experience. The more you can help them succeed, the better. If you happen to have a silencer, start with that attached. Without fail, when I have a new shooter start with a .22LR, they’ll say something like “Wow, that was a lot easier (or quieter or gentler) than I expected!” That’s exactly the response you want. As they develop some confidence, you can ask them if they would like to try something with a little more power like a 9mm. (Read more about the benefits of learning with a .22LR firearm, here)

While you can teach a basic grip at home before you go, you’ll probably need to reinforce the technique at the range. If you can get your student starting with the basics of high grip and proper support hand placement, that’s a good start for day one. You can always help them fine tune later as they develop confidence. Also, be sure to watch carefully while your guest shoots. Less experienced shooters have a natural tendency to cross the support hand thumb, and that can be bloody when shooting semi-automatic pistols.

7. Collarbone in Front of Their Belt Buckle

I don’t like to overload my first-time students with a myriad of stance details. In fact, I consider it a win if I can get them using proper weight distribution. Once that’s achieved, it’s easy to help with foot placement and such.

Because of the big bang that’s about to happen in front of their face, most every new shooter leans back from the waist to get their face as far away as possible from the gun. After asking permission, I’ll gently position them, so their collarbone is in front of their belt buckle. As a visual, you can ask them to imagine dropping a penny from their collarbone to the ground. Tell them to stand so that penny doesn’t hit any body parts on the way down. Or if that doesn't work, try telling them to stand so they feel like they're about to fall over forward. Getting their torso angled forward instead of backward is not only the right technique, it helps them control the gun, which leads to confidence and better overall results. (You can read more about stance problems and how to solve them, here)

You want your first-time shooters to bring home (literally!) a target with lots of holes in the center, so make it as easy as possible. When the day is done, they won’t be thinking about how close or far the target was; they’ll be looking at that paper. I like to start new shooters with targets placed three to five yards away. Not only is it easy to hit, but it's also easy to see the results as they shoot, so they get instant feedback. The effects of minor technique errors are minimized, so even as they flinch or jerk the trigger, shots are still getting on target in a respectable fashion. Remember, the goal is to get them to come back, so there’s plenty of time to fine-tune technique and longer range results later.

We humans can only absorb so much information at a time, so I don't even talk about the importance of controlling the trigger until the new shooter develops some confidence. Once they get comfortable loading their own magazines, shooting with an acceptable grip and stance, and getting hits on target, I’ll start to teach them the importance of a perfect trigger press.

I like to explain that the gun they are shooting weighs two or three pounds, but the trigger requires twice that much force to operate. As a result, it’s easy to “pull” the sights off target during the trigger press without even knowing it. Again, after they’ve shot some real rounds, you can show them via dry fire how to focus on pressing the trigger without moving the gun.

If you’ve done these things, and allowed your student to proceed at their pace, you won’t need to fake any encouragement because they’ll have succeeded.

It’s important to recognize that teaching is a skill. Just knowing everything about a topic in no way prepares one to impart that knowledge on another. As the instructor for your guest, it’s up to you to know how to deliver information in an organized and logical way. It’s also important to avoid overwhelming your student with everything you’ve learned over years or decades of shooting. It’s OK if they don’t perfect every technique on the first outing. Get them going on the most important basics safety and with a big dose of fun. If you do that right, they’ll want to come back, and that gives you an opportunity teach them additional skills with every new outing.