How to Zero Your Pistol Laser Sight 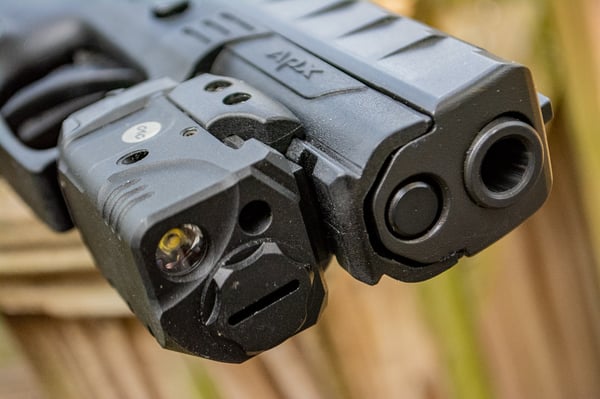 Have you ever gotten all worked up about something only to later figure out that whatever was causing anxiety wasn’t all that big a deal? I have. In fact, I used to spend way too much time and energy thinking about the optimum way to “zero” a laser sight on a pistol.

Since the laser can’t be in the center of the bore itself, it’s (by definition) offset from the path of the bullet. That means that, like a rifle and scope, you have to choose a distance at which the laser beam and bullet path will intersect. Let’s walk through the zeroing thought process using a Beretta APX RDO pistol. This pistol has a rail forward of the trigger guard, so I mounted a Crimson Trace Railmaster Pro.

The Railmaster Pro offers an integrated weapon light and laser. For this specific combination of laser and pistol, the laser itself is offset from the center of the bore by 1.5 inches. More specifically, that translates to 1.43 inches low and .31 inches to the right. Hold this thought for a hot second while we discuss the impacts of the two basic approaches to solve this problem.

Perfection at a Specific Distance

Option one is to adjust your laser, so it intersects the path of the bullet at a certain distance. This is how a scope on a rifle works. Where you might “zero” a rifle at 100 yards, you’ll probably zero a pistol and laser at a much closer distance, maybe somewhere between 10 and 25 yards.

Here are the ramifications of this the specific distance zero. Suppose we zero at 10 yards. At that distance, the bullet will go right through the laser dot on target. When shooting from closer distances, the bullet will hit high and left of the dot. In the worst case, if your target is at point blank range, your shot will be 1.5 inches high and a bit left. The closer you get to 10 yards, the less that impact point difference will be. If your target is beyond 10 yards, then your point of impact will be somewhere low and to the right of the laser dot. That’s because the bullet is moving from its high right starting position, passing through the point of intersection with the laser beam, and continuing downward and slightly right.

The other approach is to eliminate distance as a theoretical concern by aligning your laser to point directly parallel to the barrel. Since the bullet path and beam are parallel to each other, your point of impact will always be 1.5 inches low and slightly to the right of where the laser dot rests on target. Of course, we’re assuming that for pistol distances the bullet trajectory is flat. If you’re doing this at really long range, say 50 yards or more, then the bullet will drop a couple of inches so results will vary.

So, let’s net this out. We’re talking about handguns and since lasers aren’t allowed in most bullseye competitions, our use case is recreation and plinking or personal defense. The question is simple. Does your method really matter?

In the parallel approach, you’ll always be an inch and a half off from your aiming point. Assuming a 10-yard zero distance with the intersection approach, your worst-case scenarios are 1.5 inches high and left at 0 yards and 1.5 inches low and right at 20 yards. At longer distances, that low right figure will increase, but most people don't usually shoot past 20 yards or so.

On paper, that may sound like a lot. In reality, it’s largely irrelevant. The question you need to ask is this. In a self-defense situation are you really capable of shooting to within an inch and a half of your precise aiming point? Probably not. Add movement and adrenaline to the equation and that 1.5-inch offset becomes meaningless.

Once I figured that out, I worried a lot less about my laser zeroing approach. Now, I bring a sandbag to the range and zero my lasers for 25 yards. Why? Mainly because it’s easier than trying to get a parallel alignment and (in theory) I only have to worry about my shots hitting a maximum of 1.5 inches off at point-blank range. As the target gets closer to that 25-yard mark, the shot impact and laser move closer and closer together. Knowing I won’t be shooting with that level of precision in a self-defense encounter, that’s good enough for me.

There’s one more consideration in this case. The Beretta APX RDO is built to accommodate an optical sight on top of the slide. With the Trijicon RMR optic, I see a glowing red dot out in space over the target area. That brings up another decision. Since the optic overlays a red dot and the laser overlays a red dot on the target, should you alter your zeroing to account for the possibility of seeing multiple dots?

I don’t think so, and here’s why. When shooting in dark conditions, a laser dot leaps into view. Combine that visual effect with the brain’s tendency to focus on a threat, and you’re almost certainly going to focus on the laser dot on target. In fact, once that dot is in your field of view, looking at iron sights or through the optic becomes secondary and even unnatural. While difficult to explain, this effect becomes apparent when you try it. If you have a laser, using a verified unloaded gun, do some experimentation in low-light conditions in your home or garage and see how it works for you. For me, in brighter light when a laser dot isn’t instantly visible, my brain focuses on sights or the red dot sight, so I use that. When the laser takes over my attention, my brain uses that. As a result, I don’t worry too much about the “multiple dot” possibility in this configuration.

Sure, at the range when you’re taking your time and looking through the optical sight, you might see two dots at some distances. So what? While at the range, I usually disable the laser anyway as it’s not very useful in daylight or brightly lit indoor conditions.