Improve Your Pistol Skills on 100 Rounds per Month 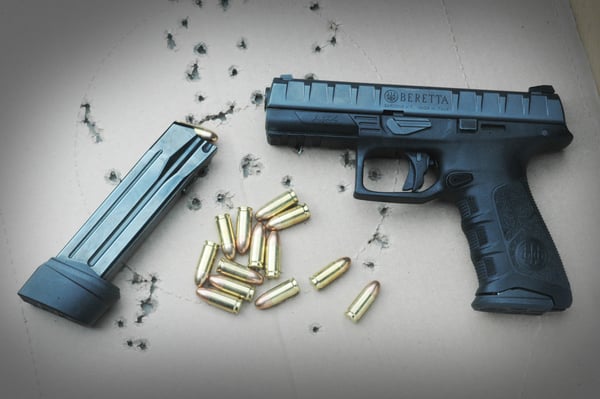 If you carry a defensive firearm or compete in practical pistol, you know consistent practice is the key to confidence and skill-building. We all need to practice more often, so we dry-fire at home to improve our skills without the time and expense of going to a range. Dry-fire is effective, and it’s something I do it on an almost daily basis, but at some point, the rubber has to meet the road and we need to put our plans into action and send rounds downrange.

The problem for many (if not most) gun owners is finding a place where they can shoot the kinds of drills that will help them improve develop the skills they need to get better. Because they require multiple targets, drawing from a holster or movement with the gun, the typical pistol drill requires an outdoor pistol bay or similar range where those things are permitted.

Also, most of just don’t have the time to devote to an hours-long range session on a weekly or monthly basis, and ammo costs can add up. With that in mind, I put together a group of common pistol drills that you can shoot on most indoor or outdoor pistol ranges, even ones that place a limit on how many rounds can be fired in a given time period..

Designed by the legendary Bill Wilson, this drill gets you accustomed to multiple, consistent shots on-target. While the original is a timed drill, in this variant, you are shooting for maximum accuracy. The target for this drill is a USPSA Metric target, NRA B-28 target or similar man-shaped target. Aim for the maximum value area on your target, dropping as few rounds as possible into lower-scoring areas.

There are five strings of fire in this drill.

If you can’t draw from your range, shoot this drill from the low ready position.

A great drill to help improve your accuracy. Tape an ordinary 3x5 index card to your target and place it at three yards. If your range has a five yard or seven yard minimum distance, use a 4x6 card instead. Shoot six rounds into the card at your own speed with the goal of getting six hits on the target. Once you’re able to do that consistently, concentrate on getting all six holes in the card to touch. Once that happens, (and it will, eventually) move the target back a yard and try it again.

Another drill from Bill Wilson, the 5x5 is shot at 10 yards and helps train several essential skills. Ideally, this drill is shot with a shot timer and your time will affect your scoring, but if your range has a speed limit on your shooting, take your time and get your hits instead.

There are four strings of fire in this drill, and while it should be shot with a USPSA or IDPA target, but any human-shaped target will work if those aren’t available..If you can’t shoot this drill from a holster, shoot it from low ready instead.

String 4: Draw and fire 4 shots to the body and 1 shot to the head freestyle.

A classic drill that has its own Wikipedia page, this drill helps you concentrate on making the shot when it matters the most. Using a man-sized target set at 10 yards, put two rounds into the highest-scoring area of the center-mass area, then one carefully placed shot into the center of the head region of the target.

The debate rages on about the usefulness of a fast reload for the average armed citizen, but the fact is that the motions needed for a reload also come into play when clearing most common pistol malfunctions.

The drill itself is easy to learn, but difficult to master. Shoot two rounds into the torso area of a human-shaped target set at seven yards, reload with a new magazine, then shoot two more. For a variation, load only two rounds in the first magazine to practice your slide lock reloads.

The Ball and Dummy Drill teaches you how to overcome a trigger jerk, or a short, violent pull of the trigger that pulls your sights off-target and tends to drive your shots low and left. To start this drill, hand a magazine and a few rounds of live ammo to a friend or a range officer, along with three or so empty shell casings. Have them load your magazine and insert one of the empty casings after each three or four live rounds. This way, you’ll won’t be aware of when an empty casing will show up in the chamber of your gun, and when it does, you’ll be able to see how you are moving your gun as you pull the trigger.

And after all those drills are done, you still have about 10 rounds left over use and practice with, or you can use those rounds to show off your newfound pistol skills to all your friends.