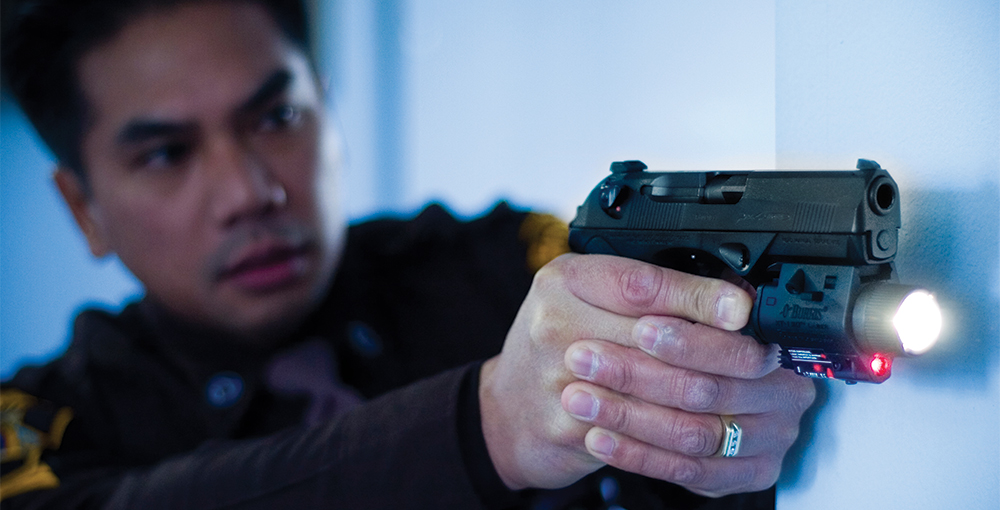 One of the best things about my life is how I’ve cultivated so many great friends. Those friends enrich my life, and it’s a pleasure when I get the opportunity to do something nice for them. This week, Mitch Dawkins, whose dad shot on my rifle team when he was a teenager, called about a shooting lesson for his new bride, Megan. Megan is preparing for a career in law enforcement and Mitch wanted me to give her a pistol lesson.

They showed up in the afternoon with their gear, and I asked Megan how much instruction she’d had. As an answer, she showed me a piece of paper her instructor had given her. It was a copied story I’d written about a trip to Paulden, Arizona. Inspite of my years of competition shooting and teaching, I’ve continued to learn, and I like to share what I learn. I was relating my experiences at a writer test of the a then-new line of competition pistols. There are a few aspects of shooting a pistol that are critical to getting a good shot. Grip is certainly important, both in shooting accurately and quickly. Sight picture is obviously important, but the biggest impediment for most shooters is trigger management. No matter what you’re shooting, you won’t shoot well if you don’t manage the trigger properly. We’ve all heard that you squeeze the trigger and don’t jerk it, but sometimes just being told a simple fact doesn’t make a mental connection.

An accurate shot requires that the trigger be activated without moving the gun off target. On first thought, this seems easy. It would appear that all the shooter has to do is to make the gun go off with the trigger finger while not disturbing the aim with hand movement. This is a part of the equation in extreme accuracy shots, but close distance shooting doesn’t require this much precision. Many pistol shooters have trouble keeping their shots in a four inch circle at just five yards. How could this happen?

The problem comes from the shooter trying to manage the recoil before the shot goes off, meaning the gun moves drastically. Even worse is the tendency to push the gun violently away in fear of the shot, an involuntary habit called “flinch.” Flinch makes firing a good shot almost impossible. No matter how well you hold the gun up to the time of the flinch, it will be moved off target before the shot is fired, and you won’t see the movement. Once this involuntary habit is firmly entrenched, it’s difficult to shake. 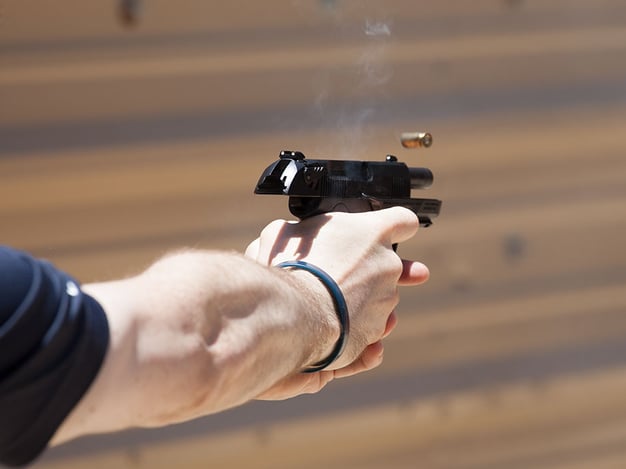 As the gun fires, the finger stays on the trigger for a split second to assure a clean press.

Shooting a rimfire pistol helps, because the mind fears the quieter report and light recoil less, but ultimately, the shooter must learn to control the trigger to get over flinch. There are several methods of doing this, but the shooter needs to understand that he has a problem before he can correct it. The tried and true method is to fire mixed real and dummy ammunition. If you fully expect the gun to fire, and it doesn’t, you can see the severity of your recoil anticipation. With a dummy round in the chamber, the shooter lines up the sights and breaks the trigger and sees the muzzle dip. The shooter can then see why the shots have been going low and left or right.

The best analogy is this is to think of popping a balloon on the floor by stepping on it while holding a full cup of coffee. If you stomp the balloon, you’ll spill the coffee. If you lift your foot, place it on the balloon and slowly lower your foot to the floor, the balloon will pop and you won’t spill coffee.

All this is easy to understand, and it’s easy to do one time in an unhurried fashion, but it becomes a little harder when you’re under pressure. In order to consistently manage the trigger properly, you must unlearn your old habit so thoroughly that you can manage the trigger properly even when you’re not thinking about the trigger. Once you learn proper trigger management when shooting slowly, you can speed up the process. The best shooters who are blindingly fast will tell you they pull the trigger all the way back even though they’re shooting almost as fast as the gun will cycle.

When the buzzer sounds at a match, or an assailant comes across the room for you, the skills you’ve cultivated in the quiet of your living room dry firing or on the range by yourself tend to go out the window. Managing the trigger has to become second nature, done without conscious thought, and this requires repetition if you have spent years mismanaging the trigger.

Doing anything well always requires effort. Time spent learning to properly manage the trigger of a handgun is as rewarding as anything you can do to improve your accuracy.