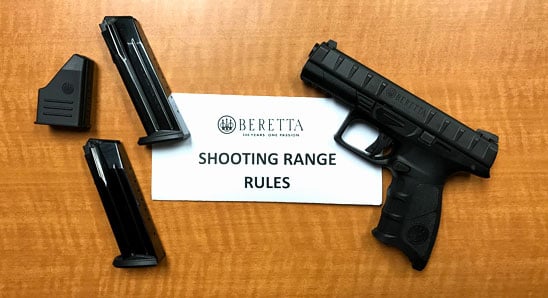 Every activity that involves other people has given standards for etiquette. You know, the customary rules of behavior that experienced folks just seem to know even though there may not be flashing signs on the wall explaining said expectations.

For example, when dining at Chez Raison d’Etre, you’re not supposed to drink out of the finger bowl even though it appears to contain perfectly good water. Apparently, you shouldn't ask for a straw for your Champagne de Saint Gaul Orpale Blanc de Blancs either. Don’t ask me how I know.

Also see: Two Mistakes Rookies Make With Concealed Carry - And How To Fix Them

In golf, it’s considered poor form to step on the green anywhere between the hole and your opponents ball. How the heck are you supposed to know that when you’re a beginner? Besides, it looks dorky when you take the long way around the green rather than just cutting across. It would really help if someone would paint lines or put up flags wouldn’t it?

When it comes to shooting with others at the range, there are also expected standards of behavior, even though they may not be clearly spelled out. Let’s take a look at a few important shooting etiquette standards. Oh, and before we get into it, the thing about shooting etiquette is that unlike slurping champagne, which the sommelier may consider a mortal faux pas, following these really can make the difference between life and death.

I’m never really fully relaxed at a shooting range unless I’m the only one there. Why? You never really know what the people on either side of you are doing with their guns.

Standard range etiquette calls for everyone to stop touching their guns – period – when the range is cold and folks are changing targets. Almost without fail at a busy range, I see people tinkering with their gun while the range is cold. Sometimes they’re messing with a scope. Sometimes they’re performing some adjustment, cleaning, or adding lubrication. Often, they’re excitedly showing their range buddy what’s so nifty about their handgun or rifle.

Again, almost without fail, when I call them out and ask them to stop messing with their gun while the range is cold, I get a response like the following. “It’s OK, my gun is unloaded.” What’s rule number one of gun safety again? That’s right. A gun is ALWAYS loaded!

Especially with handguns due to their short barrel length, be really, really cognizant of where the muzzle points at all times. I can’t tell you how many times I’ve seen a shooter point a gun at others beside them on the range, often without even knowing it.

If you want to be safe on the range, and make it clear to other shooters that you are extra cautious, pretend that your gun has a light saber of infinite length sticking out the muzzle. Assume that whatever that muzzle crosses is instantly destroyed. Every time you move your gun, think about that laser beam and what it might touch with each and every movement.

With that said, here are the “higher risk” actions where you can learn to be especially careful. It’s when shooters are doing these things that they are most likely to muzzle a nearby shooter.

After finishing, when you turn around to talk with your range buddy about that last target, put the gun down first rather than turn around with it in your hand. This is the most common muzzling mistake that I’ve seen.

When removing your gun from the case, or putting it back in, pay extra attention to the muzzle direction. I know, it’s unloaded, but remember rule one.

Pay extra attention with loading, unloading, and racking the slide. Many shooters will reorient the gun to make administrative functions more convenient. Make sure that the muzzle remains pointed directly down range during these actions even if you have to rotate your body.

Also, pay attention to staying right up on the shooting line. If you step back a few feet behind the line with your gun, other shooters are technically in front of you, so you’re muzzling them. Whenever you do anything that involves touching or shooting your gun, always make sure that you’re right up against the shooting line.

Standing around with grace and style

This tip is really a bonus one that shows extra consideration for other shooters on the range.

When the range is cold, make a very visible and deliberate effort to step back several feet behind the firing line. You may not be messing with your gun, but other shooters can’t necessarily see that. If you step back from the table and stay there the whole time the range is cold, you’re making it very clear to everyone else that you’re being safe. Think of this one as being visibly considerate to others, kind of like waving to a pedestrian in the crosswalk to let them know you see them.