Position is the key to upland birding hunting

It was a perfect fall day, with frost on the ground, a light variable wind, and hardwoods bursting with color. The dogs easily differentiated between foot and body scent and were handily tacking down birds. All was right with the world except for my buddy's miserable shooting. His shooting reminded me of a season I had many years ago, one where I didn't know if I should wrap my gunning iron around a tree or take up another sport.

There were no problems with gun fit, chokes, or loads; they were all good to go. The issue came from improper positioning, something that is frequently overlooked in the woods. Here are five tips to help shooters harvest more upland birds.

Keep up with your dogs.

If you've got big running dogs then you've got to keep up with 'em. Hard-charging dogs cover a lot of ground. That's a good thing because it means that they'll find a lot of birds. Those dogs quickly run pass-through cover and focus on the good stuff. If you're lollygagging then it'll take time to get up on that point. Some wild birds that are pinned will hold for a long time. Others feel the dog's pressure and will wild flush while still others walk away and then they flush. Hunters that aren't keeping up with their dogs miss opportunities. If your dog runs inside of bell range or if they cast in the 30-40 yard distance they are easier to keep up with. In any instance, keep up with your dogs so when they're birdy or go on point you're not too far away.

Position in the open, shoot into the thick.

That was the biggest mistake I made during that terrible season, and it was the one my buddy made last year as well. We both got into thick cover reasoning that the bird would flush into the open. Our thoughts were that we'd have better vision of the bird, faster target acquisition, and that our shot wouldn't be deflected by branches or leaves. The problem came from not being able to properly swing. Branches checked our swings, and since we couldn't follow through we'd inevitably shoot behind the birds. Shotgunning is a dynamic sport, and if you're shooting from an open area into the thick cover you'll be able to move. Maintain your swing if the bird flies into the leaf canopy and don't quit on your shot. Just because you lose sight of the bird doesn't mean it won't drop out of the leaves. Enough shot will get through so as to drop the bird. 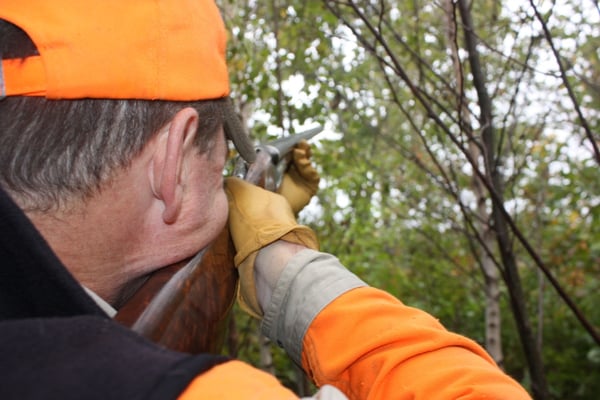 Drop to a knee.

The late Edmund Davis developed an effective shooting technique for thick cover. When Woodcock flushed in low alder runs they would disappear in the leaves. To better see them and to continue his swing he'd drop to one knee. His muzzle was in the more open part of the trees and by continuing his swing he'd drop birds. The technique is described in his one book called Woodcock Shooting.

Set up your position.

Adjust your position based on your game birds movements. Woodcock hold tight, so when I'm in a Woodcock cover, my group walks in single file. When a dog goes on point, we move to pre-determined shooting zones, with one gunner to the left at 9 o'clock, one behind the dog at 6 o'clock, and one to the right at 3 o'clock. The bird is surrounded, so one shooter will get a good shot. When hunting Ruffed grouse, and wild pheasant and bobwhite quail in fields it's better to spread out. If the dogs pin the birds, then we'll semi-circle the dog. Wild birds can be track stars, and if they run out from under a dog and flush, then we're lined up so that one shooter is usually in good position. The key part of the line is that all hunters to walk together on the same horizontal plane. Look around frequently to make sure one buddy hasn't walked ahead or lagged behind.

Visibility of your dogs and buddies is critical so I'll wear blaze orange even in states that do not require it. My dogs always wear orange collars. By pre-establishing shooting zones and, more importantly following them, all hunters stay safely on the same page. Wild birds aren't predictable, and if a bird flushes in a direction different from what shooters prepared then let it fly. Follow it up if that is your preference or move on to find other birds. Safety shouldn't be compromised under any circumstance.

While these tips are helpful at any time of the year, they're particularly useful in the full foliage of the early season. And as we all know, that is the time that is coming up.