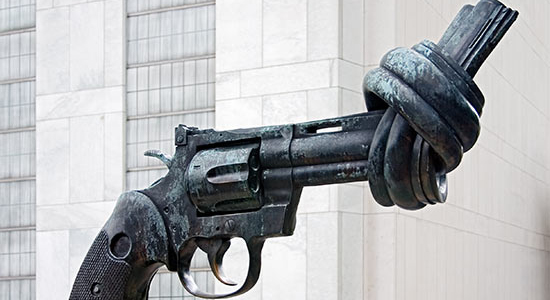 If you’re like me, you probably get a knot in your stomach and a grimace on your face when you hear these words. We’ve heard them so many times, and they always mean the same thing - someone wants to take our guns away from us. More recently, this has taken the shape of attempts to take our ammo away from us. Whatever tactic they choose to employ, the common denominator is that some people wish that we didn’t have firearms. We can get into debates over what their true intentions or motivations are, but that’s another article. Today, I want to talk about how we, as gun-loving, law-abiding people can take away their thunder and regain control of our own destiny.

The first point is that we have to vote.

Fortunately, the recent elections went very well for gun owners. The most vocal of the gun control politicians have learned that their feel-good politics just aren’t sitting well with the electorate. They learned by losing elections. I haven’t got a total count, but it appears that almost all of the anti-gun politicians and efforts were dealt a heavy blow. That’s good. But before you go patting yourself on the back, keep in mind that this was just one election, and they are not going to give up. In fact, many on the other side have been saying that they lost because they didn’t try hard enough to enact their agendas. Guess what? They’ll start almost immediately looking for new ways to get their job done. So while I appreciate and applaud the recent election results, I want to remind all of you that the next round has already started.

That leads to the second point - Let’s take control of the agenda while we can.

I don’t have the answer to all of these situations, and heck, these are just a couple of the issues that our opponents use to try to convince the public that guns shouldn’t be available.

Forget all of the rational arguments and statistics. None of those matter. They do well in convincing gun supporters that they are right, but they have little influence to change an anti-gun person’s mind. The point is this - are we going to come up with ideas and drive initiatives, or are we going to sit back and play defense all the time? I say we take the fight to them. Let’s come up with commonsense, practical and effective ways to reduce gun violence. Let’s also begin a public awareness campaign that can shift public opinion to our side. Then, when the gun control advocates start talking about children being hurt by guns, we can reply, yes…and here’s what we’re doing to address that. When they talk about criminals being able to get guns, we can say, yes…welcome to our fight against that. When they talk about violence in our schools, we can say, glad you’re joining our fight against these things. Welcome aboard!

I think it’s all about perception. The gun control advocates…ok, let’s call them the gun confiscation advocates… don’t use rational arguments or statistics. This is not a debate that will be won through presenting the best argument. They use emotions. They point to a child, a school shooting, or a criminal incident and draw on the emotional response to the situation. That’s their weapon.

Look, twenty years ago, driving without a seat belt was accepted, DUIs were not considered that bad, and speeding…well that was just how people drove. Today, each of these things are viewed with disapproval by almost everyone. The change didn’t happen by accident. It was the result of a massive public awareness campaign.

It is true that the NRA has led this fight and that they have many programs that are designed to educate people and make their lives safer. Look at the Eddie Eagle Program for young children; it’s a great success. Look at the Refuse to be a Victim Program that teaches people how to avoid crime. It’s another awesome program. Then there are the NRA firearms courses that go into how to properly use, care for and store firearms. These are great. But how many people are taking these classes? How much of the general, non-gun public is even aware of them?

We need an overarching strategy to take control of our message and get it out to the people.

I’ve seen some recent publicity on the number of self-defense uses of firearms - families being saved because they knew how to use a gun, robberies being prevented and criminals going to jail. This is a great start, but we need more. Forget paying the politicians, perhaps it’s time to start paying for positive publicity. Perhaps it’s time to start putting our money to use letting people know just how many children and families are protected each year with guns.

As I said, I don’t have all of the answers. But part of being active in forums like this one is the ability to tap into a vast collection of smart people with great ideas. So…. What’s your idea? How can we take this argument to the people and win? How can we tug at the heartstrings of America and convince them that perhaps they should side with legal, responsible gun ownership as a solution rather than a problem?

Let’s take the best ideas and try to get them implemented. Perhaps we can start a new trend.

Give me your best ideas and ….Carry On!