Shoot or Don't Shoot? What Would You Do? 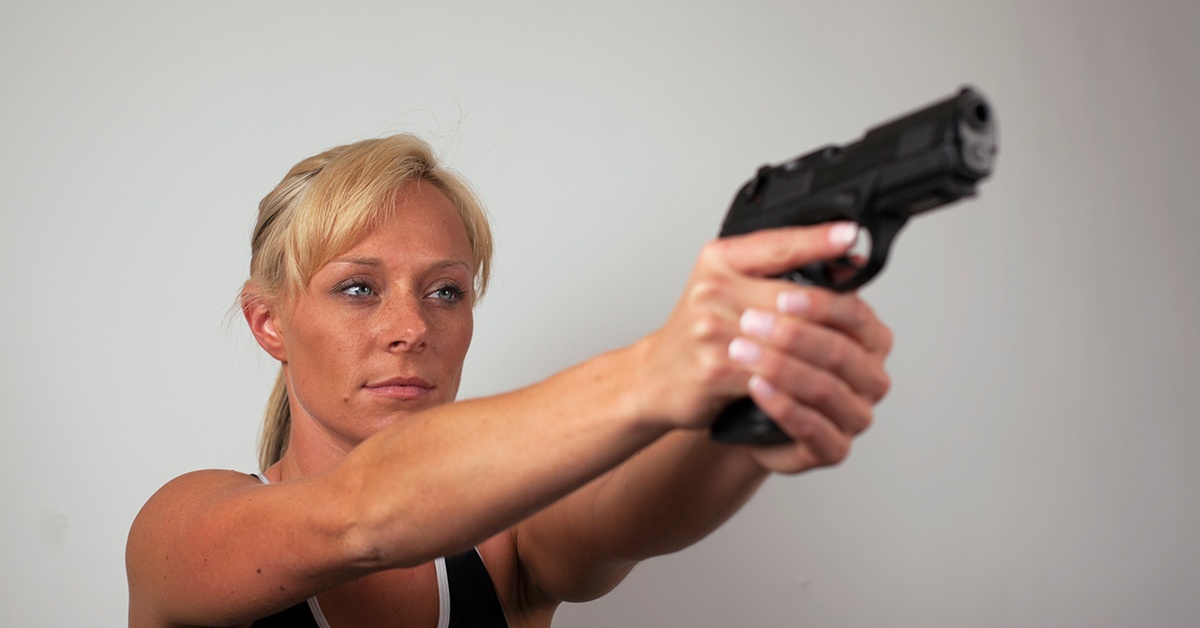 My partner and I responded to a domestic disturbance in one of the local neighborhood.  We pulled up next to the suburban, middle-class home and approached the door not knowing what the situation was.  The door opened, and we were met by a young woman of about 35 and what appeared to be her son of about 15.  She frantically waved for us to come in and was  repeatedly said, “Hurry, he’s going to kill her…he’s going to kill her!” She led us to a closed bedroom door through which we could hear muffled, angry voices and rustling from some commotion.  As she opened the door, I’ll never forget the scene…

A large, bare-chested man of about 40 straddled what appeared to be a young girl of 16.  He had his hands on her throat and was rhythmically raising her and thrusting her back into the bed.  His face was red, sweaty and full of anger, and I was unable to tell the condition of the young girl.  My partner rushed into the room ahead of me and as best I can recall she grabbed the man’s right arm and started to try to pry it loose from the girl’s throat. He paid no attention to her and seemed not to even recognize her presence, instead he continued choking the girl.  I drew my sidearm and yelled. “Police!  Police!  Stop or I’ll shoot!” The man didn’t notice this either. I fired four to six times. I didn’t know for certain.

“Cease Fire!  This scenario is ended!”  The screen in front of me froze.  My video partner stood still holding on to the man’s arm with a distressed look on her face. The angry man was held midway in his motion, and I could see the young girl was blonde and probably not even a third his body weight.  “Tell my why you did that?”  My instructor looked at me as if I had committed a huge mistake.

“The suspect was strangling the girl. I had no way of knowing what condition she was in, but I knew that if his actions continued he would kill her – assuming she wasn’t already dead.”

“But your partner was right next to the suspect and the girl was, at times, partially blocking him as well.”  There was still an accusatory tone in my instructor’s voice. She stared, waiting for my reply.

“Yes,” I replied, “But I had clear shot and was confident enough that I would not hit either my partner or the young girl.” My voice was filled with confidence concerning my own shooting ability as well as my justification for the shooting.  “The applicable case law can be found in State v. Cook covering the “Alter Ego Rule” of self defense. In this situation, the young girl would have been justified in defending her life against the larger male aggressor. The fact that she was justified in doing so gave me the same justification to defend her from the life-threatening aggression.”  We had just recently covered the case laws relating to deadly force and self-defense, so I was confident.

The instructor stared at me for a moment before responding.  Then she smiled. “You are absolutely right regarding your justification, Mr. Starnes; good job.  The question that I now have is whether the justification for shooting made sense in relation to the other factors.”  She paused.  “Or, did you endanger your partner’s life and maybe the lives of the other people present by choosing to shoot when you did.  Let’s take a look and see.”  She turned away from me and punched some keys on her computer.  The screen went blank then came alive again replaying the events in slow motion as she added her own commentary to the unfolding events. She advanced the film to the point where the first shot appeared superimposed on the screen.  It was a center-mass hit on the man’s chest. “Wow!  Nice shot!” she said then proceeded to show each of the subsequent shots in time with the moving images on the screen.  Four more red dots appeared one right after the other. Three of them were center-mass hits on the subject.  The last one was centered on the suspect’s angry face.

I recount this training scenario not to brag but to ask the reader’s opinion.

Obviously, you have my response. I chose to shoot. You also have my justification. But this was a training scenario. And like many similar scenarios, it begs the question, “Should you just because you can?”

What other considerations might come into play? What are the other options? Then the next set of questions appear… How would the family react? What would their written statements say? How would the media react? Will you face charges? If so, what will the trial look like?

In today’s climate, every armed citizen must consider the aftermath and the consequences of using their firearm. I’m not arguing that the choice above was wrong.  I merely wish to force the reader to consider these points BEFORE they encounter such a situation. Every armed individual needs to have thought through scenarios like this and understood the complete range of complications that may come with the decision to use deadly force in today’s world. Like any self-defense strategy, waiting until the moment of truth may be a fatal error.