Shooting with the “irons”

Before doing anything, I shot it in its “factory new” condition. As we discussed in “A Quick Tour of the Beretta ARX100, the rifle comes equipped with “iron” sights so you require no additional equipment to take it to the range and get busy. I only note the word “iron” because, technically speaking, the sights are made from polymer. I found these to be a bit taller than standard AR-15 type iron sights, but then again, the geometry of the ARX100 is entirely different than that of an AR-15.

Because the stock can fold to the right side, and because cartridge cases can eject from that side, the comb of the stock falls at a steeper angle as you move towards the butt. On a standard AR-15 rifle, the line of the comb continues more or less straight back from the receiver, parallel to the ground.

I found the aperture sights to be effective out to a couple hundred yards, and that only because my eyes aren't all that great. The aperture dial will meter out to 500 or so, and people will normal vision and a steady hand will be able to hit a silhouette target at that range using the standard sights. The front post is adjustable for elevation, so you can dial in the sights to your specific choice of ammo. While I didn't have a replacement handy to test, the front post appears standard, so you should be able to replace it with a tritium version if you want low light capability using the included aperture sights. 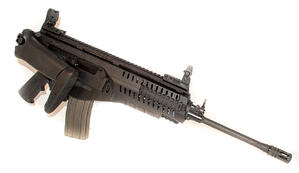 While this is a combat rifle design, and not a benchrest target shooter, I wanted to see how accuracy compared, so I mounted a Hawke Optics 3-9x Panorama EV. I used a relatively low mount as you can see in the picture here as a guess to get the right sight picture and good cheek weld. That turned out to be a good thing and raising the rifle to my shoulder brought the optic right into line. Later, I tried an Aimpoint Micro H1, again using the low mount option and not their standard AR-15 style riser. This also lined up perfectly for me given the stock geometry. There, now I’ve done it, I’ve used the word “geometry” multiple times in this article. My high school match teach would be so proud that I’m using my geometry skills later in life!

The bottom line with my optics testing on this rifle is this. Just realize the “geometry” is different that what you may be accustomed to, so don’t go buying a bunch of stuff online until you mount the ARX100 to your shoulder to see how it lines up for you. Then you can estimate the scope mount height you want to use.

Looks are deceiving with this rifle. It’s not one of those rifles that looks like it needs a sandwich. It’s got some body to it, so you might think it’s heavy. It’s not. In fact, it weight in at just 6.8 pounds. To put that in perspective, it’s just a few ounces heaver than a Colt M4 carbine in it’s base configuration.

The center of gravity feels a bit forward compared to a traditional MSR, likely a result of the piston system up front and no need for a buffer tube and spring in the back. Using some highly subjective finger balancing, the difference in center of gravity is maybe an inch.

The magazine release controls required no different procedure for me - the right side button is in the same place that I’m accustomed to. I could reach the right side bolt release with my trigger finger. It takes a little getting used to as you need to exert some pressure, but after a little practice, it was a natural motion for me. If you prefer, you can also reach the left side bolt release with your support hand thumb. These examples assume right-handed shooting, but as the ARX100 is absolutely ambidextrous, just reverse if you’re left-handed.

Although the ARX100 is a field use rifle, I shot it for accuracy just because I was curious. Like any gun, you’ll want to experiment a little to see what ammo it likes best. As the barrel is a 1:7 twist rate bore, I expected the rifle to prefer heavier bullets, but based on my admittedly limited testing, it seemed to prefer standard weight 5.56mm and .223 Remington projectiles. The bottom line is that it will shoot 1-inch groups at 100 yards if you find ammo that it likes.

The barrel is threaded and comes with a standard bird cage type flash hider, so I felt compelled to take that off and mount a silencer. I had a SilencerCo Saker 556 available and tried that with a variety of ammo. Function was perfect and the silencer caused a small shift in point of impact. I tried both gas block settings, standard and non-standard and function was fine with both.

As addition of a silencer changes the gas flow dynamics, I did get a face full of gas each time I pulled the trigger. That’s not unusual with suppressor use and another great reason to always wear approved eye protection when shooting anything.

I also changed the ejection side mid magazine (I cleared the rifle first for safety!) The ejection pattern was virtually identical on the opposite side and I credit this to the clever design of dual extractors. The rifle doesn’t really have a “default” right or left hand pattern, so they end up the same.

The ARX100 is one flexible rifle. Unlike most other rifles with configurable features, the ARX100 is purely ambidextrous. It’s not a right handed rifle that can be forced into left handed operation. It’s a neither handed rifle and you choose how you want to use it.

Shooting the ARX100, I can totally see the value for rough use. No tools operation, easy barrel swaps and simple customization to the shooter make it a “one rifle fits many” alternative. For recreational and home use, you can’t beat its ability to accommodate all members of the family. Large, medium, small, right handed, left handed - not matter, it’ll work for everyone.