How are things going at SHOT Show this year and what products should you be on the lookout for?

Well… I got into Las Vegas last night and went to the Harris Publications party. You may not recognize the name Harris Publications but I’m sure you’re familiar with a few of the magazines they publish. They publish Combat Handguns, Personal and Home Defense, Glock Autopistols, Pocket Pistols, Blacks Guns and several more.

While there, I got to talk with Stanley Harris, the company founder. He’s got to be in his late 70s or early 80s, but is a sharp man and very fascinating. This is one of the great things about SHOT Show: you get to meet a lot of interesting folks.

Another of these folks is a woman named Lynne Finch. Lynne owns a company called Female and Armed based out of Northern Virginia. She specializes in what she calls “Home Training Parties.” Essentially, it’s a Tupperware party (minus the Tupperware) and a bunch of women get together at someone’s home and learn about guns and take concealed carry classes.

I told Lynne I thought this was a brilliant idea and a great way to teach new folks about shooting who otherwise might be too intimidated to sign up for a class at the NRA or some other location. If you want to learn more about Lynne, her website is www.FemaleandArmed.com.

Of course, I didn’t just chat with people all day, I also checked out more guns than I can wrap my head around. One of those guns was the Beretta Pico. I know you’ve probably seen it on all of the magazine covers but not a lot of people have had a chance to actually handle it.

Put simply, I can tell you that it feels good in the hand. It’s a very sleek gun that won’t snag in a pocket or bellyband. One of my favorite things about the Pico is that it comes with real sights. I know most gun encounters will be up close and personal and that’s what the Pico is designed for. But the truth is, you never know where you’ll have to take a shot from. It might be 7 yards or 10 yards or more. I realize that a 10 yard shot with a .380 pocket pistol isn’t the easiest, but imagine how much harder it would be without real sights?

I look forward to when the Pico is released (I hear around April) and think it will be a strong seller. Also, not a lot of folks know that you’ll be able to get interchangeable barrels on the Pico so you’ll be able to turn it into a .32 instead of a .380, if you wish.

Another gun I was excited to get my hands on is the ARX100, Beretta’s new rifle chambered in 5.56. The first thing that jumped out at me was that the rifle doesn’t weigh much at all compared to a traditional AR. The ARX100 is mostly made out of polymer, which is the reason it’s so lightweight. This will be a huge welcome to military, law enforcement, or people who spend 8 hours at a rifle course and hate to haul around a heavy rifle.

I also almost forget to mention that you can swap out barrels in this gun and that you’ll eventually be able to swap to .308, 7.62 or .300 Blackout. I look forward to shooting this when it comes out, which, like the Pico, should be around the April timeframe, and I think it’s going to be the next big step in the modern sporting rifle platform. 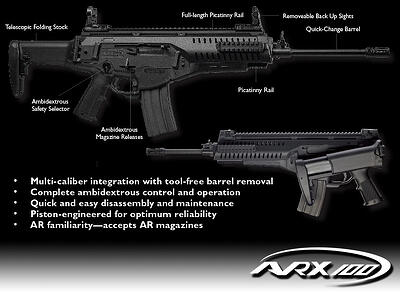 Well… that’s enough for now because I’ve got to run. There are just too many booths and products left to check out. But, tomorrow I’m going to tell you about Beretta’s new shotguns and also what’s coming out of Benelli. I’ll also have some other products to discuss, including gear bags. (I love bags, what can I say.)