The Governing Bodies of the Shotgun Sports 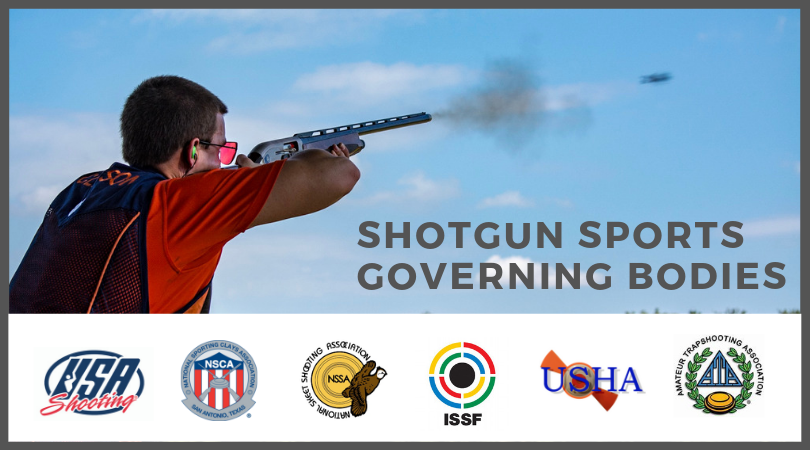 Clay target shooting can be incredibly informal. All it takes is a safe place to shoot, eye/ear protection, a way to launch the targets into the air, and a shotgun with a few shells to shoot at them. While this kind of “back forty” shooting is a wonderful, non-intimidating way to introduce shotgunning, it’s an opportunity that’s harder to find with each passing season.

Sadly, fewer of us have back forties. And even sadder, there’s less inclination to make the effort to create this kind of quality time with family or friends. Today, it’s much more likely the new shooter will be introduced to shotgun shooting at a formal range at a gun club. Most likely, the shooting layout will be for American trap, skeet, or sporting clays.

The Beretta Blog’s series of posts called “Basics of the Shotgun Games” has covered these big three so far, and plans are to delve into handicap trap, doubles trap, doubles skeet, 5-stand sporting clays, FITASC, the international shooting games, helice (aka zz birds), and more. Each of these games has a governing body.

Governing bodies of shooting sports generally have three purposes. First, they establish, oversee, and enforce the rules of the particular games. This includes everything from the specifications for the field and course of fire to equipment and ammunition limitations.

Second, they sanction events and serve as the record keepers for the sport. They compile the scores and use them to assign classifications and handicaps. This keeps the competitions fair and competitive and determines who qualifies to compete for top honors.

Finally, governing bodies promote participation in and understanding of their respective games. No matter whether you’re a total beginner or a tournament-hardened competitor, the governing body’s website and its publications will provide information from which you’ll benefit. Governing bodies also certify instructors to evangelize for the game and coach shooters at all levels.

Even if – or perhaps, especially if – you’re heading to a gun club to experience a shooting game for the first time, a visit to the website of that sport’s governing body will provide a lot of need-to-know information. Reading about and watching a video or two on the new game will allow you to arrive feeling confident and ready to have a great time without worrying about everything being unfamiliar.

For your quick reference, here’s a list – including links – to the governing bodies of most of the shotgun sports you’ll find in the United States:

The ATA is the governing body of American-style trapshooting all around the world. Specifically, that includes 16-yard trap, handicap trap, and doubles trap, all of which are shot on the standard trap field layout as specified by the ATA. The ATA also operates AIM (their official youth trapshooting program) and operates the Trapshooting Hall of Fame. The organization was originally founded as the American Trapshooting Association in 1900 and changed to the current name in 1923.

Each year the ATA certifies more than 6,000 tournaments at which more than 55 million targets are thrown. The headquarters are located in Sparta, Illinois on the grounds of the World Shooting and Recreation Complex. This is the venue of the ATA’s annual Grand American World Trapshooting Tournament held each August.

With approximately 15,000 members and 700 affiliated member gun clubs, the NSSA is the largest organization in the world dedicated exclusively to the sport of skeet shooting. The game of skeet was invented by a hunter looking to up his success when hunting ruffed grouse. The form of hunting practice became so popular, the first National Skeet Championships were held in 1926 and the NSSA was formed not long after.

The NSSA website is chock full of useful information and direction to get started in skeet shooting whether for recreation, serious competition, or anything in between.

The game of sporting clays was originated in Europe and came to the United States much later than other shooting games – actually in the early 1980s. The National Sporting Clays Association was launched in Texas in 1989 and is the sister organization to the National Skeet Shooting Association. Both organizations headquarter in the same campus at the National Shooting Complex in San Antonio.

The NSCA is the largest sporting clays association in the world with more than 22,000 members in all 50 states and 10 foreign countries. More than 600 member gun clubs serve members and host both registered and recreational shoots. The NSCA oversees sporting clays, FITASC, and 5-stand shooting in the United States and holds the U.S. National Sporting Clays Championship each year. Like the NSSA’s site, NSCA’s website contains about anything anyone would want to know about shooting sporting clays.

Munich, Germany is the home of the ISSF, which was founded in 1907. Membership includes more than 150 shooting federations from Africa, Americas, Asia, Europe, and Oceania. They orchestrate all Olympic qualifying in the shooting sports as well as World Cups and World Championships in all of their shooting disciplines.

You might ask, “What the heck is helice shooting?” It originated in Europe and migrated to the United States where it is sometimes called “ZZ Birds” after the name of the targets. The game was created to mimic live box pigeon shooting and is commonly referred to as “the most difficult thing you can do with a shotgun.” Scoring these birds within the ring is an extreme test of wingshooting skill. That alone makes this shotgun game worth covering in a future post.

The USHA governs helice shooting in the United States and is responsible for qualifying the U.S. team to shoot in the world championships. Membership is small, but dedicated. In fact, there are currently only 16 gun clubs in the U.S. with sanctioned helice layouts. Texas has the most with five – it makes sense since USHA HQ is in Texas, too. The USHA website is a great place to begin your exploration of shooting ZZ birds.

USA Shooting is the home of the USA Shooting Team. It trains and promotes the U.S. athletes who participate in the disciplines governed by the ISSF. It orchestrates the selection of the U.S. Olympic and World Cup shooting teams – including shotgun disciplines.

The organization implements and manages development programs and sanctions events at the local, state, regional, and national levels. USA Shooting advocates and raises funding for development and training for the U.S Shooting Team. Its headquarters are at the U.S. Olympic Training Center in Colorado Springs, Colorado. The shotgun athletes train on land leased at nearby Fort Carson. USAS was formed in 1995 and became the full-time national governing body for the international shooting sports in the United States.