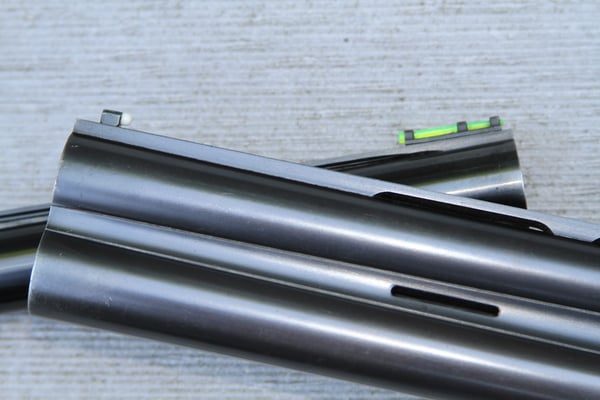 Rifles and handguns are aimed. Shotguns are pointed. But what does that really mean?

It means shooting any firearm with a single projectile is precise. It requires time and attention to align the sighting system – whether open sights or optical sights – on the intended target. Alignment and steadiness are so critical that the best shooters control breathing and heartbeats to press the trigger at the absolute proper millisecond.

Shooting a shotgun is less precise. You have hundreds of projectiles delivered in a pattern comprised of both width and length that offers substantial margin for error for lack of precision. Pointing a shotgun is faster and more instinctive. You simply see the moving target in relation to the barrel of the shotgun. Then reflex and hand-eye coordination take over to make instinctive adjustments as you pull the trigger.

The situation in which there exists the most crossover is when a rifle or pistol shooter mounts a heads-up, reflex-type sight on their firearm. The view through these electrical, optical sights appears to suspend a dot in space. They are fast to point because if the eye is in position so the dot can be seen, the projectile will impact the target where the dot appears on it. However, these types of sights are not as precise – especially at long range – as magnified optical sights or even precision variations of open sights.

Need for a Bead

Nearly all shotguns intended for wingshooting wear a bead on top of the barrel, positioned just behind the muzzle. So it begs the question, “If you don’t aim a shotgun with the bead, what’s it there for?”

It’s perfectly possible to mount, swing, and point a shotgun without a bead to consistently break clay targets and down any game bird that grows feathers. In fact, there’s a school of thought and a shooting style in which the way to learn to shoot a shotgun is entirely without a bead or by blocking the bead and muzzle from the shooter’s view. Truly instinctive.

If you’ve ever watched someone skilled at hip shooting a shotgun - exhibition shooters or pros who set out to break the most clay targets in an hour, a day, etc. – then you understand how superfluous a bead can be on a shotgun. They don’t even bring the gun to their shoulder, so it makes no difference whether there’s a bead on it or not.

That said, all shotguns intended for wingshooting come from their makers with a bead on the end of the barrel and often a second one riding the rib about half way between the muzzle and breech. On top of that, there’s a lucrative industry in aftermarket beads and highly visible “light pipes” for shotguns. There has to be a reason.

The modern shotgun is built to fire from the shoulder. That’s the standard and normal way of shooting one. We are trained to look down the top of the barrel to make the shots. Before ribs on barrels – which are also now on virtually every new shotgun – the bead at end of the barrel was an indicator you didn’t have the gun canted one way or the other. It’s still an indicator your head is “properly” positioned on the stock. If you see barrel/rib between the back of the receiver and the bead, your shooting eye is too high. If you’re looking into the back of the receiver and can’t see the bead, your eye is too low. If the bead appears as though it’s seated directly on the receiver, then your head is positioned properly and you have the best line of sight for accurate shooting.

Many shotguns, especially those meant for shotgun sports in which you call for the bird with the gun mounted to your shoulder – trap, American Skeet, and increasingly sporting clays – come with a smaller bead mounted about halfway up the barrel.

The purpose of the mid-bead is to assure the proper alignment of the gun even more. The proper “sight picture” with a mid-bead is to have the front bead stacked on the mid-bead to form a figure 8 or a snowman. The tiny bit of upward tilt this gives the barrel helps to move the center of the pattern higher to ink ball rising targets, which are all targets in trap and skeet. Quality hunting shotguns frequently wear mid-beads, too. Hunters who shoot clay targets expect them to be there, and sight pictures (and the guns) just don’t look right to them without the mid-bead.

In reality, when you’re shooting a mid-bead equipped shotgun on wild birds or in games shot from a low-gun call, you look past the beads all together. You better, or you won’t hit much.