For many of us around the country, early goose season is here. If you’re at all like me, you’re not even remotely ready for it. What would a hunting season be without a last-minute, late-night scramble to remember where the blind bag is, where I stashed my calls, and what did my wife do with my gear? I swear, I think she hides some of that stuff just because I tease her about her shoes. When you finally get everything around and get out to the field, you can take a breath and relax. At least that is the theory, right? Never works for me either. Through all the craziness of getting out into the field, there is one thing you can always count on – something is going to go wrong. Do you just pack in and go back home, or do you deal with it? Well, duh – you deal.

X marks the… something 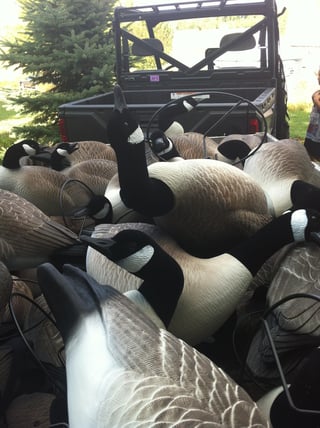 We all know that for success in the early season, you need to scout and be where the birds want to

be. Usually for the early hunts, if I’m on the “X” then I can get away with a small spread of high-quality decoys. Ever done everything just right and then get to sit and watch the birds fly right on by because they wanted to be elsewhere? Happened to me. Shoot, it happens to everyone at some point. Pop quiz, hotshot – what do you do?

If you answered, run across the field, yelling out a war cry as you sky bust like a mad fiend, um, that’s not the right move. Don’t ask me how I know. No, there are really three moves that are a little outside the norm, which could save the hunt that day and on future days.

Spread it on thick

Like I said, when you’re on the spot, you really don’t need many decoys to have a great hunt. If you’re off the spot, but can see birds and know there are more still to take to wing, there is a play. It’s a tough one though, but it has worked for me several times. I have more decoys on a trailer stashed out of sight, but not far away. My main fields for the early season have a small wooded area from which I can set up within 100 to 150 yards. I park my UTV with a trailer full of full-bodied decoys in the tree line, and if I need to, I can turn my small spread into a monster flock in about 15 minutes if I try hard enough.

Canada geese are pretty social birds. They’re kind of like freshmen in college during the first week. They may know where they want to go, but if they see a big group of others, they’ll go check it out. It helps to have flags going and at least one other person calling. You’ve got to draw attention to it.

Go to their home

You may prefer to hunt over water for geese. I usually don’t because once you start shooting, it can be all over in minutes if your timing is off. However, desperate times… Yadda, yadda, yadda. If you’re off the “X” in the morning in the field, you can always pack it in, go have some breakfast and then go sit on the bird’s roost pond. This is why I always try to find the roost ponds first thing in the scouting process. I want to know where they are, when they leave, where they go, and when they’ll be back.

I’m kind of like a jealous boyfriend. Of course, what I do when they come back might sound more like a horror movie plot, so maybe that’s a poor analogy. You might run into some distant relatives though, and if you have an early teal season, well then…

The last option is the least favorite. Wave the white flag for the day and call it. Head back and regroup. Go scout out the new location and see if you can get permission for the next morning. A few years ago, I had the geese dialed for two weeks before early goose season arrived. Opening day, had everything perfect and *poof* no geese. I watched them fly about 300 yards to the north of me and keep on trucking. The two main flocks of resident geese did this. I thought I had everything perfect and I probably did. They were just headed elsewhere.

It didn’t take too long to find them on a new field about three miles further to the west of where I was set up. What took them to the new field overnight is beyond me. We stopped in to chat with the farmer, and it turned out he was an old friend of my grandfather’s, so getting permission was easy. It’s not always going to go that way. Once during a regular season, I had the field they were in the day before. The next day they were flying to a new field south of where I was. I hopped in the truck and followed them just in time to see the hunter who had permission for that location light them up. That’s all part of hunting. The challenge is part of why we do it.