If you happen to be a hunter you’ll definitely want to check out the Sako 85 series. When I got back to my room I got on the Impact Guns website and found a Sako 85 Classic with a wood stock selling for $1,999. They also have the Sako Brown Bear, Grizzly and Kodiak for taking down larger game. 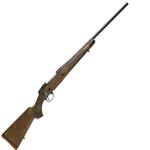 In addition to hunting rifles, Sako also makes rifles for military and law enforcement. The Sako TRG-22 in .308 is apparently the sniper rifle of choice for many countries around the world. If you feel that you need one of these rifles – and who doesn’t – it’s going to set you back a little more than $3,000. Of course, Sako makes dozens of other rifles than what I’ve mentioned here and you can check them out at www.sako.fi.

Tikka happens to be a newer line of rifles produced by Sako. The Tikka rifles are more affordable and are priced around $800. There are many hunters who swear by their Tikka and believe you can’t get a better rifle for the money. They have very smooth bolt travel and a good trigger pull.

And although there are over a dozen different Tikka models, the one that caught my eye is the Tikka T3 TAC. It’s a bolt-action rifle with a free-floating barrel made of match grade steel. It has a Picatinny rail on top and comes with 5-round magazines. The stock is made of a combination of fiberglass and polymer and it’s one good-looking gun.

If you’re in the search for a new rifle then definitely check out either Sako or their Tikka line before you make your decision.

Once I finished looking at rifles I headed over to check out a company called Laser Devices. As their name implies, they make weapon mounted lasers and lights. I’m a fan of having a laser and light on my home defense weapon so I was interested in seeing what they had to offer.

First, they make lasers and lights for handguns. Their BLAST 2 model is a laser/light combo. It comes with a red laser and a 200 lumen LED lamp. Also, it’s supposed to be able to quickly attach and detach to a variety of guns without losing the zero.

If you only wanted a laser on your gun you can check out the DBAL-D model, which gives you the choice of either a red or green laser. You could also get a tactical light only without a laser. But as I mentioned earlier, I prefer the laser/light combo.

Laser Devices also makes lasers and lights for rifles. There are too many models to list but if you want to see what they offer their website is www.LaserDevices.com. On the website they also offer training for use of their devices, which I think is great, since not enough people spend time training with weapon mounted lights and lasers. If you’ve never done so, at least take your light and laser with you the next time you head to the range. And if you have access to an outdoor range head there as it’s getting dark to really train effectively.

Well, that’s enough for now. I’ve got to head back and look at more guns, gear, and other products because SHOT Show will be over before I know it. If you ever get a chance to attend SHOT I highly recommend it because there’s nothing else like it on the planet.

It’s exciting and overwhelming at the same time because there’s just so much to see and so many interesting people to meet. Just make sure and give yourself a limit of what you’re going to spend so you don’t end up broke or divorced when you get home (or both.)