Why You Need to Hunt Turkeys 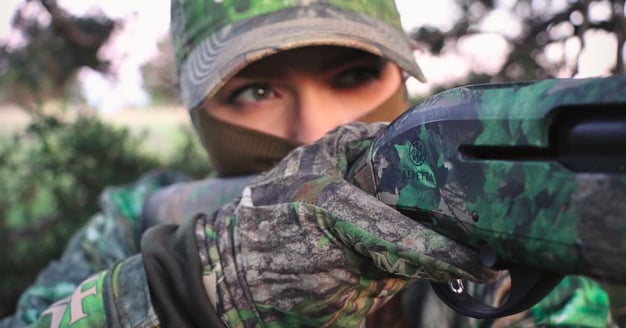 There’s an excitement in the air as friends, clients, and guides prepare for the turkey hunting season. We look forward to the morning chill, sometimes with a bit of frost, fog, and dew. Heck, some places even contend with snow. We prepare our gear, purchase new layers, hats, gloves, devices, and such to keep us warm. Some may think it’s pure insanity to go out in these conditions. Turkey hunters are a die-hard breed of which you should be a part.

Also See: Six Things That Can Spoil Your Turkey Hunt

We prepare to head out into the wilderness to pursue big-ol’ gobbling toms for several reasons. If you ask any turkey hunter, they’ll have a different number one reason on their list. Here are several to give you the inspiration to get outdoors and try to track down a bearded red-head. Chasing bearded red-heads? Now isn’t that reason enough? Okay, guys. I know you’re not interested — yet.

Getting outdoors is good for your health. Doctors are even prescribing outdoor time to their patients. While some take their health for granted, or can’t take the word of their physician as good advice, here are some other reasons to turkey hunt.

I know getting fit refers back to the health issue, but the majority of the population lists getting rid of that spare tire their top New Year’s resolution goal. Getting outside to add a few steps to your pedometer as simple as stepping into the great outdoors to look for turkey tracks.

Can you imagine that there is such a thing as Nature Deficit Disorder? Indeed there is, and you need to avoid it. Doctor Richard Louv states that a lack of time in the outdoors is linked directly to several disturbing mental and physical health issues. Yep. There’s that “H” word again. Everything leads back to reason number one.

While adults spend a lot of time worrying about kids spending too much time being “plugged in,” we need to look in the mirror. We need to remember our primal instincts and get outside. Hearing birds sing, wind blow, leaves rattle, hens cluck, and toms gobble will open a healthy "wild child" not just for the kids but for you.

Don’t be afraid of the great outdoors. Seize the challenge and find a way to get out there. The task of figuring out where you’re going to go and how to get there is only part of the mission, should you choose to accept it.

Once you make up your mind, you’ll have fun being an outdoor super-sleuth who is learning to locate turkey habitat. Yep. You need to figure out where these big birds live, how they hide, and what will entice them so you can get a view and ultimately a shot.

Everyone knows that the ultimate satisfaction is in succeeding. Hitting that special number on the scale, getting the high mark on a report, making it through the traffic light before it turns red, or putting the smack down on a thunder chicken will bring happiness.

You’ll spend days, weeks, maybe even months learning where turkeys live. You’ll have to figure out their routine. You need to find the one that has a beard. You need to entice him into A300 Outlander range. Sometimes you’ll wiggle at just the wrong moment, and he’ll skitter away leaving you heartbroken. Other times you’ll be surrounded by his girlfriends and offspring. It’s a thrill, and success, to be a few feet from his family.

Put Healthy Meals on the Table

Of course, the ultimate gratification is pulling the trigger and earning a well-deserved turkey dinner. Once you’ve scouted, planned, practiced, had failed attempts, and then made a great shot, you’ll be proud to put a hormone-free turkey on the table.

Connect with Your Family

Your family doesn’t just have to come together for dinner time. You can involve them in the pursuit. Even if a youngster isn’t old enough to hold a hunting license, they can hold the binoculars or camera. They’re close to the ground, so of course, they’re closer to locating a track. Your wife just might have that magic touch on a pot call, and it may end up being the only time she brings a big red-head to you.

Hunting families are healthy families who share many a story around the campfire or dinner table. Get out there and start figuring or how you can hunt a turkey.