The United States Practical Shooting Association (USPSA for short) is a popular sport that combines the accuracy of a pistol shooting match with the speed and action of a foot race and mixes in a fair amount of strategy and planning as well. Once you’ve shot your first match and understand what it takes to compete in USPSA, and have taken the time to develop a smooth trigger press and a good sight picture, it’s time to learn how to shoot a USPSA stage quickly and efficiently, with no wasted movement.

USPSA competitors shoot in a variety of different divisions, all based on the features of their guns. Open Division is just that: Pretty much anything goes… compensators, extended magazines, red dot sights… you name it. Limited Division is a little more limited (hence the name). Red dots are not allowed, neither are compensators, but magazine capacities can go to 23 rounds and beyond. I shoot in the Production Division, which is designed so that competitors can use the guns they’d find in a typical gun shop. Most “race” modifications such as compensators or feather-light triggers are banned in Production, and the Division is optimized for 9mm service pistols like the Beretta 92 and Beretta APX. Ammunition capacity in Production is limited, though, because in a holdover from the 1994 Assault Weapons Ban bill and in an effort to make USPSA viable in more states with magazine capacity restrictions, magazines in Production can only hold ten rounds of ammunition.

This drastically affects your stage strategy. While other competitors in Open or Limited can blissfully cruise through a stage with one reload at most, a 10-round limit on magazine capacity in Production means that if your feet are moving for more than one or two steps, you should be dropping the magazine that’s currently in your gun and topping off your pistol with a magazine that has 10 rounds in it.

Consider this stage from a match I shot a few years ago at a local club. 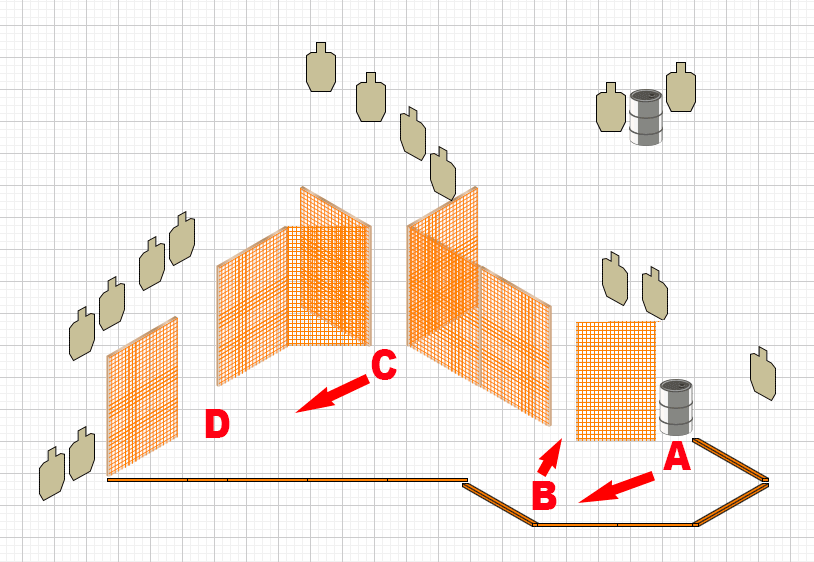 Start Position: Hands resting at sides. Gun loaded to Division Capacity (in my case, 10 rounds in the magazine and one in the chamber), safeties on or decocked, gun on barrel.

Stage Procedure: Engage targets from within the shooting area as they appear.

After looking over the stage, I quickly realized that there were four shooting positions, and then set about creating a plan to optimize the time needed to shoot the stage.

Right off the bat, you can see that the more “tactical” approach to this stage is to shoot the target that’s right next to you. He’s closest to you, so chances are, he’s a bigger threat. However, this is one of those cases where the most tactically correct approach is not the best approach for winning the stage. Because I knew that I needed to move to my left to complete this stage, I started off taking the longer, more difficult shot at the farther target, then shot the target to my right as I backed away to my left, reloading my gun after I was finished.

There are two things to keep aware of here: The potential for a match disqualification for breaking the 180° rule, and the fact there are five targets to be shot for a total of ten rounds, and you have eleven rounds in your gun. The first can be overcome by carefully choosing your shooting position, and the second overcome by making sure your sights are on-target as you pull the trigger. I had 11 rounds in my pistol (ten rounds in my magazine plus one in the chamber), so I had, in theory, one extra round to make up any missed shots. If I missed two shots, though, I’d have to reload in the middle of my string of fire, which would greatly increase my time on this stage.

Another stage that requires less than 10 rounds, and another stage where I replaced a partially-used magazine with a full magazine as I exited the shooting position.

A quick word about the cadence of my shots on this stage. You’ll note that on some targets, I am taking longer to shoot my first shot on the target, and there’s more time in between each shot as well, while on others, the shots come quickly, with very little time between shots. This is because some targets require me to pay to more attention to accuracy than others. For instance, the first two shots on this stage took a while, but they were on a target that was 20 yards away. The next two shots happened quite quickly because the target was right there next to me, and I didn’t have to worry as much about sight alignment because I knew that a quick check of the position of my gun relative to the target was all I needed to get my required hits.

Here’s where all that talk about shooting as fast as you need to get your hits comes into play. All the targets at this shooting port were close to me, and I could shoot them almost as fast as I could pull the trigger and not worry that much about accuracy.

As USPSA matches are scored using a combination of time and accuracy, analyzing a stage to see where you can shave off a few bits of seconds and still get your hits can make a big difference in your score. Because I was able to come up with a good stage plan, execute that plan the way I wanted it (something that doesn’t always happen, if I’m honest), I was able to beat most of the other shooters in Production Division on this stage.

Which is a pretty nice feeling, if I’m honest.